With his book 'The Communist Judicial System in China, 1927-1976', Qiang Fang has won the 2022 Academic Excellence Award from Chinese Historians in the United States (CHUS), a national historical association with many distinguished historians.
Cover image from 'The Communist Judicial System in China, 1927-1976' : The People’s Court of the Shanghai Pudong New District [上海市浦东新区人民 法院].
Photographer: Wang Jin.

The CHUS Academic Excellence Award is presented to Dr. Qiang Fang 'For His Scholarly Contributions by Publishing an Excellent Monograph', 'The Communist Judicial System in China, 1927-1976: Building on Fear' (Amsterdam University Press, 2021).

As an affiliated society of the American Historical Association (AHA), CHUS has grown into an academic organization consisting of more than 150 historians from the academia in the U.S., China, and the rest of the globe. The award was presented at the AHA Annual Conference in New Orleans on January 8th, 2022. 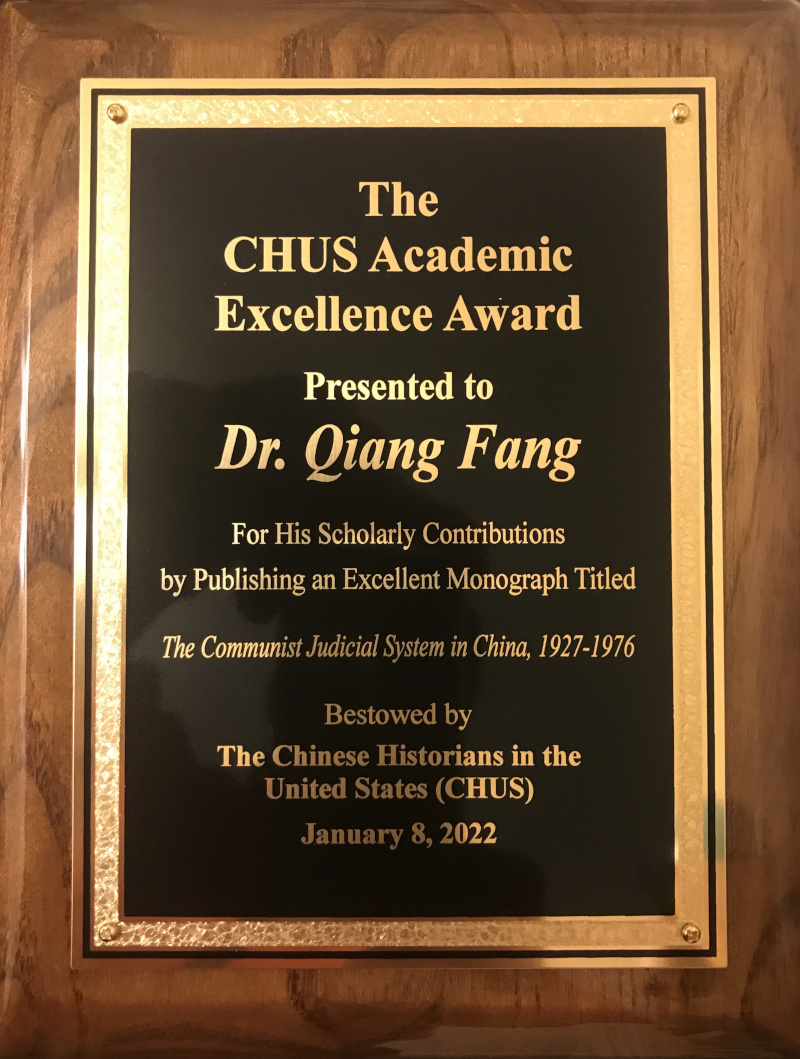 Drawing on hundreds of newly released judicial archives and court cases, this book analyzes the communist judicial system in China from its founding period to the death of Mao Zedong. It argues that the communist judicial system was built when the CCP was engaged in a life-or-death struggle with the GMD, meaning that the overriding aim of the judicial system was, from the outset, to safeguard the Party against both internal and external adversaries. This fundamental insecurity and perennial fear of loss of power obsessed the Party throughout the era of Mao and beyond, prompting it to launch numerous political campaigns, which forced communist judicial cadres to choose between upholding basic legal norms and maintaining Party order. In doing all of this, The Communist Judicial System in China, 1927-1976: Building on Fear fills a major lacuna in our understanding of communist-era China.

Dr. Qiang Fang is professor of East Asian History at the University of Minnesota Duluth.

Qiang Fang is series editor of the AUP series China: From Revolution to Reform. To submit a proposal to this series, contact Commissioning Editor Shannon Cunningham (s.cunningham@aup.nl).

Table of Contents and Introduction PDF

Download the Table of Contents and Introduction for this book here.

This book is available to order for individual purchases via our website or through any leading providers of academic books for your libraries. Recommend this book to your library using our Library Recommendation Form.