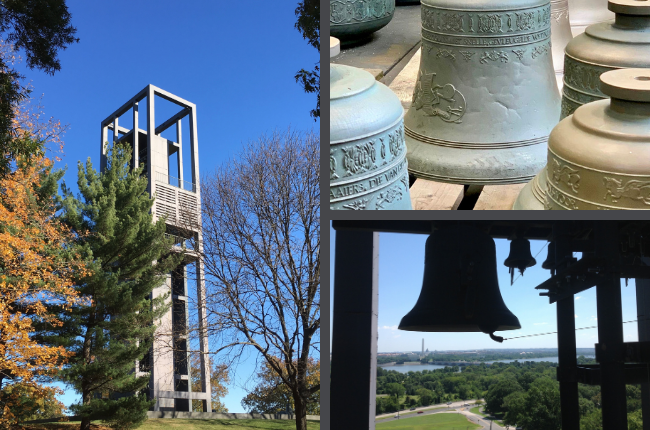 "A fascinating story of a monument hidden in plain sight. It is as a work of writing that the book stands out-a work of feeling. Bells for America is a meditation on human society, on its failures and blunders and hopes. Almost always inharmonious, such a society still dreams of making perfect sounds."
- Alexander Nemerov, Carl and Marilynn Thoma Provostial Professor in the Arts and Humanities, Stanford University

"A great accomplishment of Oostdijk's history is to reveal the passions and machinations behind the carillon's deceptive simplicity. It is the rare piece of architecture writing that exposes what you can't see simply by looking at the work."
- Bradford McKee, Landscape Architecture Magazine

"Oostdijk's book recounts the bumpy ride of the Netherlands Carillon. In Washington, nothing that big and prominent is without controversy." - John Kelly, The Washington Post

“This cultural history, ostensibly on the esoteric subject of building a Dutch carillon in the U.S. capital, is also a first-rate diplomatic history book. Diederik Oostdijk uses his nation’s gift of gratitude for exploring America’s confusing Cold War policies. More importantly the physical well-being of this carillon – a musical instrument of fifty mostly dissonant bells housed in a modernist steel tower – serves as symbol for the geopolitical ups and downs in the post-World War era.” - Verena B. Drake, Journal of American History

"Bells for America presents a sophisticated interdisciplinary analysis, neatly combined with lively anecdotes as well as some more personal reflections. The book is visually appealing and well illustrated while the writing generally flows smoothly from the pages through colorful prose. It provides valuable contributions not just to the specific history of Dutch-American relations, but to broader academic debates about the role of monuments and commemorations, gift giving and expressions of gratitude – and the vital role of non-state actors in this context – as part of the broader diplomatic process." - Albertine Bloemendal, Diplomatica: A Journal of Diplomacy and Society

The Cold War, Modernism, and the Netherlands Carillon in Arlington

Given to the United States in the 1950s by the Dutch government for America's role in the Dutch liberation during World War II and for the Marshall Plan aid, the carillon owes its conspicuous placement to the Cold War. Diederik Oostdijk traces the history of this monument, from the pageantry surrounding its presentation through its fall into disrepair and plans for its renewal. In so doing, he resolves the paradox of the carillon's placement in Arlington.

Interweaving art history, campanology, landscape architecture, literature, musicology, and diplomatic history, Bells for America recounts how the Netherlands and the United States reconstructed their national identities and fostered an international relationship in the postwar era through public art.


-- AVAILABLE ONLY IN THE BENELUX REGION (Belgium, the Netherlands and Luxembourg). For customers based in the U.K., U.S. and Canada, and Rest of World, please refer to the Penn State University Press edition (2019). --
€ 19,45
+ Order this book
Author

Diederik Oostdijk is Professor of English Literature at Vrije Universiteit Amsterdam. He is the author of Among the Nightmare Fighters: American Poets of World War II (2011).

Biography of an Industrial Landscape

Topographic Memory and Victorian Travellers in the Dolomite Mountains